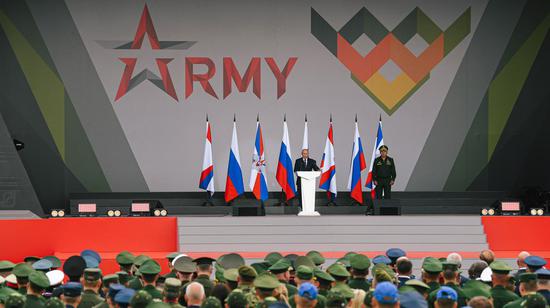 Russian President Vladimir Putin speaks at the opening ceremony of the International Army Games 2021 in a Moscow suburb, Russia, on Aug. 23, 2021. (Xinhua/Evgeny Sinitsyn)

Russian President Vladimir Putin declared the opening of the International Army Games 2021 in a Moscow suburb on Monday.

More than 5,000 troops from 277 teams that are coming from over 40 countries and regions will compete in 34 contests in two weeks.

The event serves as a good opportunity to test the participants' tactical training and skills in using weapons and equipment, Putin said when addressing the opening ceremony of the games, initiated by the Russian Defense Ministry.

The contests have made a significant contribution to direct communication between military professionals, the development of trust and partnership, as well as peace and international security, said the president.

As part of the games this year, the Chinese military will host and participate in three contests in Korla, northwest China's Xinjiang Uygur Autonomous Region.

Meanwhile, the Chinese military has sent 17 teams with a total of more than 700 troops to participate in 17 competitions in Russia, Belarus, Uzbekistan and Iran.