China's UN envoy urges 'a way out' of Yemen's 'predicament' 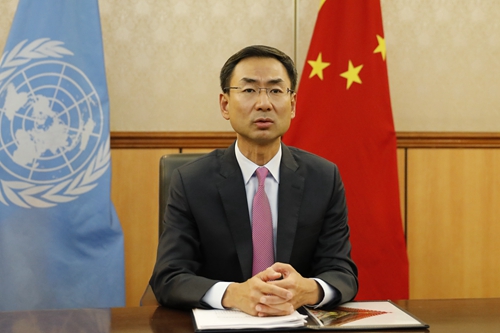 A Chinese envoy to the United Nations on Monday called on all parties in Yemen and the international community to "step up their efforts to find a way out of the current predicament" as the Yemeni people, particularly the children, have continued to suffer from economic, humanitarian and political challenges due to the country's ongoing civil war.

Geng Shuang, China's deputy permanent representative to the UN, stressed that a comprehensive cease-fire must be achieved as soon as possible, and that the peace process should be resumed at an early date.

"There is no political option for the issue of Yemen, and a political solution is the only way out," Geng told a Security Council briefing on Yemen.

China hopes that the new Special Envoy for Yemen Hans Grundberg, recently appointed by the secretary-general, will perform his duties objectively and impartially; strive to achieve a comprehensive ceasefire at an early date; and make progress in dialogue and peace talks, Geng said.

He emphasized the important role of the regional countries and the need to form a synergy to promote peace talks. China appreciates that countries in the region, such as Saudi Arabia and Oman, have continued to engage in mediation efforts, Geng said.

Countries with influence on Yemen should continue to play an active and constructive role to promote mutual trust among all parties to the conflict and adhere to the general direction of political settlement, the envoy said.

Noting that Chinese State Councilor and Foreign Minister Wang Yi has put forward a five-point initiative on achieving peace and stability in the Middle East when he visited the regional countries in the first half of the year, Geng said China has always actively supported and participated constructively in the Yemeni peace process.

China is ready to maintain communication and close coordination with all parties on the five-point initiative in a concerted effort to seek peace, build security and promote development in the Middle East, the envoy said.

Geng urged the scale-up of international humanitarian assistance to alleviate difficulties in Yemen's economy and in people's livelihoods.

The Yemeni government has taken measures to restore the economy, stabilize the currency and protect people's livelihoods, which China appreciates and supports, Geng said.

Geng called on the international community to increase assistance to Yemen. All parties to the conflict in Yemen should provide "safe and unimpeded humanitarian access" to ensure that humanitarian aid channels remain open and favorable conditions are created for easing the humanitarian situation, he said.

Regarding the Safer oil tanker, which is moored off Yemen's west coast and at risk of causing a major oil spill, the envoy said that China once again urges the Houthis to strengthen communication with relevant UN agencies as soon as possible to prevent unnecessary economic, humanitarian and marine environmental catastrophes.